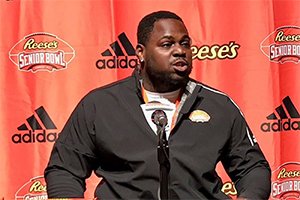 A number of players were in the running for this slot in the report, but Western Illinois DT Khalen Saunders got the nod. Not only for his performance, but also for his dedication. At the start of the week Saunders’ fiancé went into labor in Chicago. This was an eventuality the pair had prepared for since she was due January 31st. Saunders opted to stay in Mobile and he’s playing like a man on a mission. And he has a new baby daughter!!!

I AM A FATHER!!!!!!!!!! Thank you God for your continued blessings. I love you so much Kambridge Vonyea Saunders. Daddy’s coming home real soon.

Saunders weighed in at 6-0 5/8 and 320 pounds but is a surprisingly quick and explosive presence in the middle. With a stout frame like that Saunders is obviously a formidable force against the run, but it’s his pass rush potential that is so intriguing. Saunders is showing that the 34.5 tackles for a loss and 18.0 sacks he racked up during his career with the Leathernecks wasn’t a fluke, penetrating and wreaking havoc on multiple occasions in the first practice. Saunders has made a seamless adjustment to the top competition and appears to be solidifying a mid-round grade. In fact, I wouldn’t be shocked if Saunders vaulted into Day 2 on the heels of his Senior Bowl performance, a la another small school standout Nathan Shepherd last year.

To top it all off, Saunders put on a show for everyone at the end of practice by doing his trademark backflip.

In my discussions with colleagues, no prospect has received more glowing reviews than Massachusetts WR Andy Isabella. There seems to be universal love for the diminutive (5-8 7/8, 186) but super explosive wideout. Isabella enjoyed a very productive career for the Minutemen, but it was his performance against Georgia as a senior that really put him on the map of draftniks. Going for 15 receptions, 219 yards and 2 touchdowns against an extremely talented SEC defense will have that effect.

Everyone already knew about Isabella’s speed, having legendarily beat Denzel Ward in a 100-meter race in high school. And Ward tied for the fastest forty time at last year’s scouting combine with a 4.32. It’s one thing to hear about it, but it’s another entirely to see it in person for yourself. The tremendous burst and quick feet are truly special. Isabella was an absolute handful for defensive backs on the first day, consistently separating and making plays. I was impressed with his route running as well. Isabella profiles as a classic slot weapon at the next level and has the potential to eventually be one of the best in the business.

The excitement and expectations will be tempered by his lack of ideal size, but I have a hard time seeing Isabella escaping Day 2 of the 2019 NFL Draft. 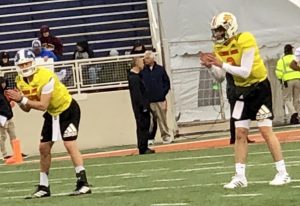 The biggest storyline of the week is the two top quarterback prospects in town, Duke’s Daniel Jones and Missouri’s Drew Lock. I think Jones is already firmly in the Top 10 overall mix and closer to Dwayne Haskins on draft boards around the league than most realize. Lock still has some work to do but could also come off the board in the top half of the first round with a strong week in Mobile.

On the first day Jones came out on top, showcasing superb fundamentals and a clean, efficient throwing motion. It’s not that Jones absolutely set the field on fire, but he was consistent and workmanlike throughout the session. There isn’t a whole lot of flash to Jones’ game, but teams with a preference for polished pocket passers are going to like what they see.

Lock was up and down, starting out well with some wow moments early but then struggling a bit later with his accuracy. There is no contest when it comes to arm talent though as Lock can absolutely spin it and make every throw imaginable. I even had trouble taking pictures of Lock throwing the because he gets the ball out so quickly. I’ve also taken note of how well the charismatic Lock has handled himself off the field, appearing comfortable in the spotlight. When it comes to quarterbacks all it takes is one team to fall in love and Lock is an easy guy to talk yourself into due to that tantalizing physical skill set and big arm.