I couldn’t pick just one defensive lineman to highlight from the North squad.  There were too many excellent performances.  Western Illinois DT Khalen Saunders, who I featured on Tuesday, continues to dominate.  The guy who really jumped out to me today though was T.C.U. DE L.J. Collier, an underrated prospect who is generating considerable buzz in the scouting community.  Even though Collier is a tad short at 6-2 1/4 he has good bulk (280 pounds) and really long arms (34 3/4).  Collier is a smooth athlete who is more quick than fast but offers superb power.  The best way to describe Collier as a pass rusher is crafty, using an array of moves and counters to win.  At this point I expect Collier to come off the board between Rounds 3-5, and I’m currently leaning toward the higher end of that range.

Arizona St. DT Renell Wren has been nearly unblockable most of the week, winning with both speed / quickness and power against a very good group of offensive linemen.  Wren also checked in at 6-4 1/2 and 315 pounds, up 18 pounds from what he was listed at in college.  The extra weight hasn’t hindered Wren in any way, shape or form and he sure carries it well.  This strong showing combined with what figures to be an amazing pre-draft workout should firmly secure Wren a spot in the Top 100 overall on Draft Day.

Charles Omenihu of Texas had a nice day too, showing more pass rush ability off the edge than expected.  I still think Omenihu profiles as more of a base end at the next level but is capable of flourishing in that role.  The same goes for Anthony Nelson of Iowa.  Finally, I was interested to get an up close look at John Cominsky of Charleston to determine exactly what type of player he profiles as at the next level.  Was it defensive end, defensive tackle or outside linebacker?  I believe the answer is left defensive end since Cominsky doesn’t appear to be a dynamic athlete or pass rusher but is strong with a rangy, jumbo frame. 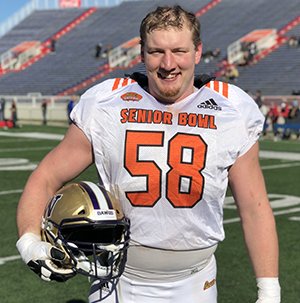 Once again there were simply too many stellar performances to only select a single blocker.  With that said, the star of the show was Washington OT Kaleb McGary.  Weighing in at 6-6 7/8 and 321 pounds, McGary won’t amaze with his sheer athleticism but is strong and stout at the point of attack with fantastic intangibles.  Last year Orlando Brown fell to the third round despite impressive tape and turned out to be a steal.  I expect McGary to follow a similar path.

On the interior Chris Lindstrom of Boston College has solidified his position as one of the top guard prospects in this class.  While not necessary a standout in any one area, Lindstrom checks almost every box including size, feet, awareness and technique.  He was even able to stonewall Khalen Saunders, which as we’ve seen this week is no small feat.  Look for Lindstrom to be a Day 2 pick and a plug-and-play starter.  North Carolina St. C Garrett Bradbury has also looked really good and helped himself.  Despite marginal size and bulk Bradbury is an athletic grappler with all the intangibles needed to excel in the pivot.  On average there are less than three centers selected in the top three rounds of the NFL Draft per year.  Bradbury could be one of those select few and would fit best in a zone blocking scheme that accentuates his strengths and mitigates his weaknesses.  A couple other names worth mentioning are Kansas St. OL Dalton Risner, who had his best practice of the week, and USC OT Chuma Edoga, who has been a pleasant surprise.

There is always a surprise or two during Senior Bowl week and Ohio St. WR Terry McLaurin definitely qualifies.  McLaurin was somewhat of an afterthought in a very talented Buckeyes wideout corps and only notched 75 receptions for his entire college career.  He’s making a name for himself in Mobile though, consistently flashing at each practice.

The 6-0, 205 pound McLaurin is speedster who caught 11 touchdowns and averaged over 20 yards per catch as a senior.  I asked McLaurin which NFL wideout he thinks he compares to and his answer was DeSean Jackson due to an ability to take the top off a defense.  In addition to being a big play threat, McLaurin is a terrific blocker as well as a standout gunner on special teams.  McLaurin also earns rave reviews for his intangibles and was considered to be one of the hardest workers at Ohio St.  There isn’t a team in the league that couldn’t use that type of skill set.

After opening so many eyes this week McLaurin is now firmly in the draftable range and I wouldn’t be shocked if he was selected early on Day 3 of the 2019 NFL Draft.

The Countdown with Oshane Ximines