I took a good look at the defensive backs in this session and a handful of cornerbacks caught my eye.  Let’s start with Jimmy Moreland of James Madison, who was a late arrival as an injury replacement.  Moreland was a standout at the East / West Shrine Game and has continued to impress in Mobile.  He isn’t very big at just 5-9 3/4 and 179 pounds but Moreland is sticky in coverage.  Moreland is known for having a nose for the ball, with 33 pass breakups and 15 interceptions during his college career, and that skill has been apparent this week.  Enthusiasm will remain tempered due to a lack of size but it’s looking like Moreland has a chance to come off the board early on Day 3.

Temple CB Rock Ya-Sin has enjoyed a meteoric rise up draft boards in recent months after transferring from small school program Presbyterian College for his season season.  In addition to a great name Ya-Sin has good size at 5-11 3/4 and 189 pounds with 32 3/8 inch arms.  Beyond being physical talented, Ya-Sin is also super tough with good ball skills.  It also appears as though Ya-Sin is faster than I had previously estimated and if he runs well a spot on Day 2 is not only possible but probable.

I also liked what I saw from Houston CB Isaiah Johnson, who absolutely looks the part at 6-2 1/4 and 207 pounds with long 33 5/8 inch arms.  Johnson is aggressive and not afraid to use that size either.  Some issues arose against the better wideouts this week, which leads some to wonder if a move to free safety might be in his future.  While that is a possibility I think Johnson will get a shot at corner because he’s going to run well in pre-draft workouts.

Finally, I’d be remiss if I didn’t mention Lonnie Johnson, Jr. of Kentucky, who had the hit of the week.  Johnson absolutely blew up Hunter Renfrow near the line of scrimmage, with a pop that rang out and caught everyone’s attention. 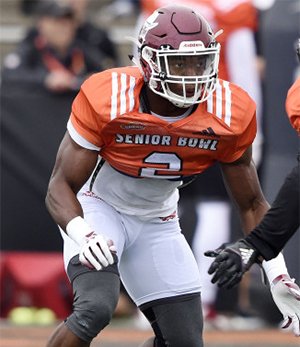 One of the stars of the weigh-in was New Mexico St. OLB Terrill Hanks, who was completely rocked up at 6-2 and 234 pounds.  Hanks doesn’t have 6-pack abs, it’s a full-on 12-pack.  Hanks has only built on that positive momentum throughout the week of practices.

In short, Hanks is exactly the type of linebacker the league is looking for these days.  A former safety with fantastic speed and athleticism, Hanks has sideline-to-sideline range and looks smooth and comfortable in coverage.  Hanks isn’t just all about finesse either, showing a willingness to hit and power and explosiveness as a tackler.

A year ago Darius Leonard parlayed an outstanding week in Mobile into a spot on Day 2 of the NFL Draft.  We all know how that turned out, with Leonard leading the NFL in tackles and being named an All-Pro as a rookie.  That’s an almost impossible act to follow but Hanks is eliciting comparisons to Leonard and profiles as a similar type of player at the next level.  Look for Hanks to come off the board on Day 2 as well to a team in search of a weak side ‘backer.

Coming into the week South Carolina WR Deebo Samuel was considered to be the top wideout prospect in town.  Not only has that turned out to be the case, but the gap between Samuel and everyone else is even wider than everyone thought.

Samuel is a dynamic playmaker with exceptional athleticism, speed, burst and quick feet, capable of getting plenty of separation, stretching the field vertically and creating in space.  He’s a crafty route runner too and isn’t afraid to get physical with his stout 5-11 1/2 and 216 pound frame.  Samuel also displayed very good hands, using those big 10 1/8 inch mitts to catch pretty much everything thrown his way.  That is a lethal combination for the unfortunate defensive backs tasked with covering him and not many have had much luck this week.  As an added bonus Samuel also offers value as a return man on special teams.

In terms of draft stock, Samuel seems to have cemented a spot on Day 2 and there’s even been speculation that he could sneak into the back end of Round 1.  Think James Washington, who also stood out in Mobile and was the 60th overall pick last year.  Ohio St. WR Parris Campbell was healthy yet declined his invitation and that may have been a mistake because in his absence Samuel is potentially snatching the top senior wideout title in this class.