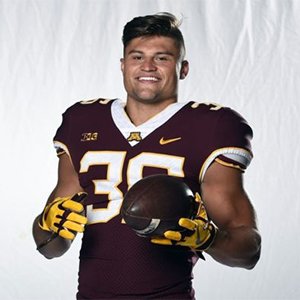 Scott Wright:  How would you describe your game to someone who has never seen you play before? What current NFL linebacker would you say is an appropriate comparison?

I would tell them that I’m a very instinctual, tenacious player. I like to compare myself a little bit to Harrison Smith just in terms of his mindset for the game. I would say I’m a very versatile player, I think I can play inside or outside ‘backer. I’m quick which allows me to have advantages in coverage and blitzing scenarios. And I’m a student of the game. I really believe you win games during the week by out-preparing your opponent. Whether that be on the practice fields, film room, meetings, whatever it might be. I think that’s something that’s very important at the NFL level. How well you know your assignment, where your alignment is on the field and all those things. Because at that level everyone’s got the talent but I feel like it’s the smartest players who come out on top.

I like to compare myself to Blake Martinez of the Green Bay Packers. I’ve noticed that he’s very consistent, knows his job and is around the ball a lot. What that shows me is he knows what he’s doing and is a student of the game, which I take pride in. We’re a similar size as well and play the same position, so he’s definitely someone I look at as similar to me.

Scott Wright:  You began your college career as a walk-on for the Gophers. Why do you believe you were overlooked coming out of high school and how has that path shaped the player you’ve become?

I think part of the season I was overlooked is I didn’t take advantage of all those camps that schools host and regional camps that a lot of these high school kids are going to now days. If I were to go back and do it I would get more involved in those, I didn’t really understand them or realize how important they were. Then another thing is I didn’t play really at all my sophomore year and part of my junior year because of injuries so when you don’t have as much tape as other recruits across the country it kind of hurts your chances. Junior year is very important for you to have a good year and have a lot of tape out there because that’s when a lot of high school kids get their Division I offers. Because I didn’t have much film and I wasn’t on the field because of injuries it kind of hurt my chances a little bit.

When I look at my story about being a walk-on I kind of look at it as an advantage. As a walk-on you have to have a chip on your shoulder. You walk into the football building every day and you always gotta prove to others and yourself that you’re going to be a better version of yourself each day. And you kind of carry that mentality and have that approach to anything you’re doing from the football field to the weight room, classroom, meeting rooms, it doesn’t matter. It pays off in the long run just because you have like a relentless, hungry attitude towards continuing to outwork people and get better.

Scott Wright:  Talk about the process leading up to earning a scholarship. Was it slow or did you feel like you belonged right away? Was there a moment when everything seemed to click?

Blake Cashman:  I felt right away that I would have an opportunity to earn a scholarship early on in my career. As a freshman I played on special teams and going into my sophomore year I was going to be in a position where I was going to be getting snaps on defense. I got the opportunity to have a lot of impact on the football game. About halfway through my sophomore year I believed that sometime in the next semester after the season that I would earn a scholarship and sure enough I did. I think it’s one of those things that every walk-on your first goal when you get to whatever school it might is to earn a scholarship. I hate to say it, but it kind of gains more respect from your coaches and provides more opportunity. Once that happens you set your next goal which is to become a starter on defense and a team captain by the end of your career. For me it was just about taking it one step and season at a time and setting short-term goals that in the end will lead to a long-term goal, if that makes any sense.

Scott Wright:  You were one of the standouts at the Scouting Combine despite flying under the radar going in. What were your biggest takeaways from that experience and what was your favorite moment?

My biggest takeaway was provably just how professional everything is and how fast all of the activities move. At the NFL level you’re no longer a student-athlete, you’re just a football player. You’re a player and student of the game and have to do all these other things outside of the football aspect of it like media, interviews and things of that nature. It’s very serious but at the same time it’s a lot of fun because you’re only focusing on one thing. So many people in my position have had to focus on football, had to focus on school, had to get maybe jobs or internships in the summer, all these things you have to do in college. But when you get to the NFL level it almost lightens your load and you put all your attention and focus into one thing which we all love doing and we’re are very passionate about doing, and that is football.

I’d say my favorite moment from the Combine was probably the last day when I was leaving. I remember reflecting on everything from the four days I was there while in my hotel room getting my stuff ready to head home. I was just thinking about the experience in general and that so many people dream about being at the Combine but there’s only like 300 athletes that get to be there. To be on that platform and showcase your skills is really cool. And for me I feel like I did really well so it was kind of a big achievement for me and you leave with a lot of high emotions and good vibes when you’re heading home. It’s relieving and it makes it all the more exciting, because after the Combine is when you start getting a lot of buzz around your name. Especially when you do well and it can just provide greater opportunity for you.

Scott Wright:  Since Indy you’ve been one of the hottest names in this class and Day 2 is being mentioned as a legitimate possibility. How has your world changed the past couple of months?

Blake Cashman:  I’ve definitely attracted more interest, without a doubt. At this point I’ve spoken with every team, multiple people that represent these teams. I try not to get caught up in all the draft predictions and scouting reports on the potential draft picks, but it’s hard not to see. As much as you gotta block it out it’s great to see a lot of positive things being said about me for the most part. Before the Combine a lot of people kind of knocked me for my athletic ability, so afterwards being able to prove those people wrong was a great feeling. Only time will tell but hopefully after the Combine I was able to jump up a couple of rounds and hopefully get my name called sooner than later. I think that’s the most exciting thing about it. A person like me that’s in my position, we’re working so hard. We’re dedicated to this process of hoping to make our dreams come true and when you see your hard work starting to pay off it’s a very rewarding feeling.

When it comes to the NFL Draft it’s never too early to look ahead. One of your former teammates and fellow Eden Prairie High School (MN) alum Carter Coughlin is already firmly on the NFL’s radar for 2020. Give us a brief scouting report on the linebacker prospect.

That’s my guy. I grew up with him and got to know him very well over the years. He’s definitely somebody that’s going to have a Day 1 impact for any NFL team. When I think of Carter I think of a guy who not only has all the talent on the football field but he is a workhorse. He has great leadership skills and I’ve seen it from day to day the three years I was with him at Minnesota. He’s constantly holding teammates accountable, he’s being a coach and a player teaching the young guys to make sure they’re prepared to get on the field. He’s just a class act guy and very genuine person who an NFL team would be lucky to have in their locker room.

The Countdown with L.J. Collier