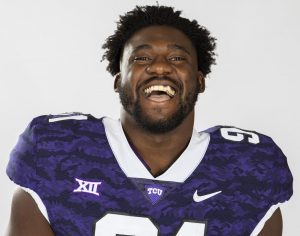 Scott Wright:  How would you describe your game to someone who has never seen you play before? Give us the self-scouting report. What current NFL player do you think would be a good comparison?

L.J. Collier:  I’m physical, I play hard and I just like to get after the ball.  Like Terrell Suggs.

Scott Wright:  You enjoyed a breakout senior campaign for the Horned Frogs. Do you attribute that to just finally getting more of an opportunity or did something click for you in that final season?

L.J. Collier:  Just finally getting the opportunity to play. Sitting early in my career I learned not to take anything for granted. To play like it’s my last and give it my all, because you don’t what’s going to happen after the season.

Scott Wright:  You had a terrific week at the Senior Bowl and opened a lot of eyes. What was your mindset when you arrived in Mobile and what specifically were you trying to show evaluators?

L.J. Collier:  Pretty much nobody was talking about me and I wanted to prove that I’m the best. That’s all I really wanted to prove. All these guys that got all the hype behind them, I’m just as good as they are if not better.

Scott Wright:  There was a point in the 2019 Senior Bowl game when you kind of just took over. I think it was in the second half. Do you remember that stretch and if so what do you recall about it?

L.J. Collier:  Oh yea. I was going inside and got a strip sack. Then I hopped outside and was getting some good rushes off. I just started to get a feel for the game and started playing, honestly. I started letting loose and relaxing.

Scott Wright:  You aren’t the biggest or fastest of the pass rushers that are expected to go in the Top 100 overall. How have you been able to compensate and in many cases outperform “more physically talented” prospects?

L.J. Collier:  It doesn’t matter to me because I’m not going to be the biggest or fastest. But hard work beats talent any day. I just work hard, I listen and I learn from my mistakes. I’m talented too though so combined with hard work you can go far with that.

The Countdown with Blake Cashman