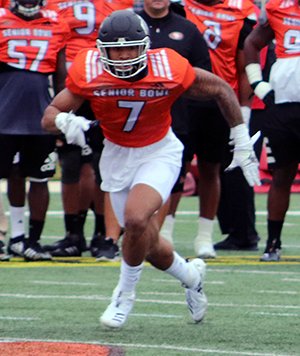 Scott Wright: There is some debate as to whether you will be a defensive end or outside linebacker at the next level.  What are your thoughts on position?

Oshane Ximines:  Wherever they need me, man.  I definitely get extra workouts with the DB coach working on my drops and things like that.  It’s coming along.

Scott Wright: How did you wind up at Old Dominion?

Oshane Ximines:  I’m from a very small area. My population is about 5,000. Haskell, North Carolina. I wouldn’t change the way I grew up for the world. I love it there. I have a lot of family there and a lot of people look up to me there. Like I said, it was a small town and a lot of the big schools just didn’t believe I could compete at their level and it is what it was and I just – Old Dominion came down and they said they wanted me.  We had a good connection and it just rolled from there.

Scott Wright: Who in the NFL would you compare yourself to?

Oshane Ximines:  That’s a tough one cause, you know what I’m sayin.  I watch everybody.  Just to name a few:  Dee Ford, Yannick from the Jags, Von Miller, Khalil Mack.  Anybody that plays the defensive end position.  I watch and learn cause they’re at a higher level than I am and I’m always willing to learn.  Willing to take little things from everybody’s game.

Scott Wright: The Senior Bowl week is a huge opportunity for small school prospects to dispel concerns about their game.  Is there anything specific you’re trying to prove in Mobile?

The Countdown with L.J. Collier