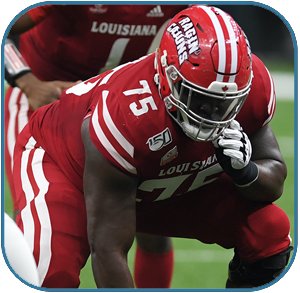 A relatively highly-regarded prospect unexpectedly not receiving an invitation to the NFL’s Scouting Combine is hardly a new phenomenon. Lately there seems to be more misses than usual though, perhaps at least partially due to underclassmen continuing to come out in record-breaking numbers.

The good news is the players who were snubbed have plenty of role models to look up to with a lengthily list of predecessors who enjoyed fantastic, and in some cases Hall of Fame, pro careers. Including Julian Edelman, Antonio Gates, Chris Harris, James Harrison, Robert Mathis, Osi Umenyiora, John Randle, Adam Thielen and Wes Welker, just to name a handful.

New England Patriots OG Shaq Mason and Tennessee Titans S Kevin Byard are more recent examples. Mason didn’t get an invite to Indy yet was still a 4th Round pick in the 2015 NFL Draft. Mason has since gone on to win two Super Bowls and sign a five-year, $50 million contract extension. Byard was inexplicably spurned in 2016 but was still the first pick of the 3rd Round. All he’s done is lead the league in interceptions while garnering Pro Bowl and All-Pro honors. The top player on this list last year was James Madison CB Jimmy Moreland, who was selected in the 7th Round and vastly outperformed that draft slot.

If trends continue somewhere between 10% and 15% of the players selected in the 2020 NFL Draft will be “Scouting Combine Snubs”. Odds are at least one of them will be chosen in the middle rounds and maybe even as early as Day 2. This is my list of the most likely candidates.

There are some extenuating circumstances that might have led to Robinson not receiving an invite, but talent-wise he belongs in Indy.  Robinson looked like a potential early round pick after his first two years at West Virginia, proving to be a rangy, athletic ballhawk and playmaker in the secondary.  After the 2018 season Robinson was dismissed from the program due to academic violations and entered the transfer portal, but his mother being diagnosed with cancer waylaid those plans.  Instead Robinson became the first player to enter the XFL Draft with college eligibility remaining and was selected by the St. Louis BattleHawks.

The XFL season will be in full-swing when the Scouting Combine is held, which may have prevented Robinson from participating even if he was invited.  It’s kind of been an out of sight, out of mind situation with Robinson for draftniks and evaluators for the past year but he’s definitely a name to keep an eye on in the coming months.

There were too many notable omissions to pick just one.

All five of those small school standouts profile as late round picks or priority free agents but don’t be surprised if a couple of them wind up hearing their name called during the 2020 NFL Draft.

It was a bit of a surprise to see Betiku declare for the 2020 NFL Draft and it isn’t difficult to see why scouts have reservations.  There is plenty of reason to be intrigued too though.

Betiku grew up in Nigera playing basketball and didn’t find his way to the gridiron until being discovered at a clinic searching for potential football prospects as a 16-year-old.  Betiku came to the United States as part of that program with former college and NFL star LaVar Arrington becoming his legal guardian.  Betiku emerged as a five-star recruit and began his college career at USC, where he never came close to living up to lofty expectations due to inexperience and injuries.  Betiku joined the Illini as a grad transfer in 2019 and got off to an incredibly hot start, with 10.5 TFL and 7.0 Sacks in the first four games.  Unfortunately Bitiku faded in the second half of the season against the meat of the Big Ten schedule, only recording 2.5 TFL and 2.0 Sacks the rest of the way.

Betiku is raw, a positional ‘tweener and basically a half season wonder as opposed to even a one-year wonder.  With that said there are still plenty of physical tools to work with and Betiku offers far more upside than most of the pass rushers that will be available on Day 3.

Motley enjoyed a breakout senior campaign for the Sooners, breaking up 13 passes while also ranking among the nations leaders in forced fumbles. It appears scouts around the league still have serious doubts though.  Perhaps that can be traced back to Motley apparently clocking an awful forty time in the Spring, not to mention a slight 184 pound frame and small 8 1/2 inch hands.  An uneven performance during the East / West Shine Bowl week didn’t do much to alleviate concerns either.

On a positive note Motley is a darling of the analytics community and will likely be looked upon more favorably by the growing number of organizations that place an emphasis on statistical analysis.  That alone could get Motley drafted at some point on Day 3 even if he doesn’t run well in pre-draft workouts.  It’s safe to say that Motley is more highly-regarded by the draftnik than scouting community though.

Sometimes there are just obvious misses and this sure seems like one of them.

Even though Dotson was named a first team All-American by the Associated Press as a senior he gets overshadowed by teammate Robert Hunt.  Dotson is a terrific pro prospect in his own right though and it’s a shock that he won’t be in Indy for the Scouting Combine.

Dotson looks every bit the part with a big, thick frame and was one of the stars of the East / West Shrine Bowl week.  A well-rounded blocker, Dotson is stout in pass protection and does an outstanding job of generating movement in the run game.  Dotson uses his power and strength to impose his will on defenders and plays with an edge.  It doesn’t always look pretty which has led some to question his athleticism but Dotson is plenty functional in that regard.

Dotson profiles as a solid mid-round pick and could even sneak into the latter portion of Day 2.

* Chris Williamson, CB, Minnesota
– Florida transfer with a nice blend of size, athleticism and physicality who can play outside or in the nickel.

* Myles Dorn, S, North Carolina
– Very experienced, instinctive and active with good production but has some physical limitations in coverage.