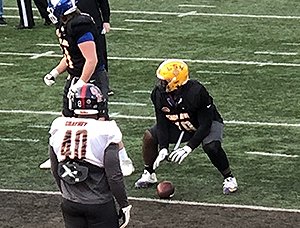 The 2020 NFL Draft features one of the deepest collections of center prospects in recent memory, largely due to an influx of underclassmen, and Lloyd Cushenberry III of L.S.U. may be the cream of the crop.

So far it’s been evident why Cushenberry was considered the anchor of an offensive line that won the Joe Moore Award as the nation’s top blocking unit.  A stout technician with big hands and long arms, Cushenberry has basically been the only one able to slow down South Carolina DT Javon Kinlaw.  A respected team captain and leader both on and off the field, Cushenberry possesses the first-rate intangibles that are so important in the pivot too.

Cushenberry could be this classes version of Elgton Jenkins, the 44th overall pick last year who also had a terrific week in Mobile.  Jenkins wound up moving to offensive guard in the pros and was a revelation as a rookie for the Packers.  Cushenberry offers that same positional versatility and could come ultimately come off the board in the Top 50 as well. 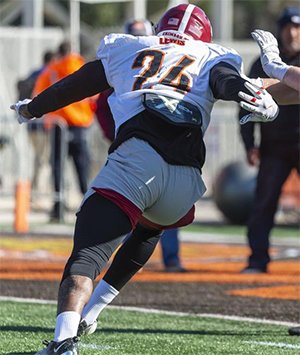 Alabama’s Terrell Lewis has gotten reps with both the defensive linemen and linebackers this week.  In the end Lewis will likely end up playing on his feet at the next level, probably in an odd front.  Regardless of where Lewis lines up he’s going to earn his paycheck as a pass rusher.  An argument can even be made that he’s one of the two or three best in this class.

Lewis is body beautiful, checking in at 6-5 1/4 and 258 pounds with 34 1/8 inch vines for arms, qualifying as a proverbial first guy off the bus type.  Lewis has shown the ability to beat blockers with both speed and power in Mobile and has looked relatively comfortable working in space and in reverse.  It’s not hard to see why some labeled Lewis as a potential first rounder coming into the week.

Don’t be surprised if Lewis ultimately slides a bit in the draft due to medical and durability concerns though.  Not to mention relatively modest production (8.0 career sacks) considering his immense sheer talent. 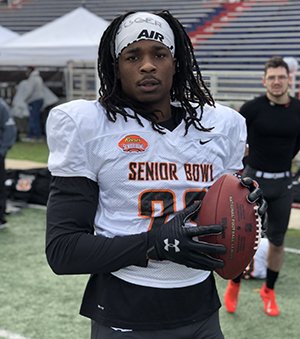 Lenoir-Rhyne S Kyle Dugger entered his senior season ranked as the top small school sleeper prospect in this class and there is a good chance he will go wire-to-wire.  Especially after the Division 2 star has now proven himself amongst top-notch competition in Mobile.

Dugger is an explosive athlete who really passes the eyeball test at 6-0 3/4 and 217 pounds.  At one point there was speculation that Dugger might get a look at linebacker due to his size, instincts and prowess against the run.  That talk should die down now though since he has looked so good in coverage.  Dugger even came away with an interception of Oregon QB Justin Herbert while covering Vanderbilt TE Jared Pinkney today.  To top it all off Dugger can contribute on special teams as well and has gotten some reps as a punt returner this week.

At this point Dugger has likely cemented his status as a Top 100 overall pick and one of the Top 3-5 safety prospects available for the 2020 NFL Draft.