In 2017, Cooper Kupp had graduated from a top tier FCS school in Eastern Washington and was putting on a show in Mobile at the Senior Bowl. Scouts and the media alike were raving about how he was beating corners in 1-on-1s and was always open. Bucky Brooks called him the top performer of the week. He was drafted 69th overall in the 3rd round, and in the 2021 season, he took the receiving triple crown of having the most receptions, yards, and TDs for a WR that season. He was a small school marvel. Could Christian Watson end up the same way?

Christian Watson just graduated from a top tier FCS school in North Dakota State. After putting up numbers with Top 5 pick Trey Lance, Watson was putting up numbers with new QB Cam Miller. After missing two playoff games with a hamstring injury, Watson helped spark the Bison offense to a dominating performance in the championship and take home the trophy. He is going to the Senior Bowl in February. Could we see the same trajectory of Kupp?

Now, Kupp and Watson are different players. Kupp was a volume WR at Eastern Washington who won by getting open with easy separation off the line and throughout the formation. His Combine performance backs this up (data from ras.football from @MathBomb) 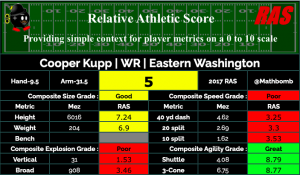 A 5 is a middle of the road RAS score. As you can see, Kupp had good size (6’1 ¾ and 204 pounds) with top notch agility scores. His speed rating (4.62 40) and explosion rating (31 vert and 9’08 broad jump) were subpar. Even without the long speed, the agility is what makes Kupp dominant in the NFL at getting open.

Watson is likely to come in a bit taller (Guessing just under 6’4) at a similar weight. He is known for his speed and may put up similar numbers to Kupp there at a bigger size. The big question will be agility and the film bares out that Watson has some of that same Kupp quickness that could make him dangerous. Let’s take a look at some specific traits:

On this touchdown reception, Watson runs a comeback route and get separation at the top or the route. Even for his height, Watson has the agility to step into a cutback and separate quickly. A diving catch with the ball just out of his reach is an NFL catch.

Watson does have deep speed for his size. This season (and two years ago with Lance) has been littered with Watson on a 9 route being 3 or 4 steps ahead of the DB. Here is an example against Youngstown State:

Finally, despite this being a reverse, you can see Watson’s open field ability to elude defenders and create big plays. He has a good sense of space and keeps his eyes down field for a cutback lane:

Watson has size combined with athletic talents to be an absolute draft steal on Day 2. He may not quite have the agility and short area quickness of Kupp, but Watson’s feel for the game and athleticism should make him an excellent NFL WR who will start for a long time.

See the first article in this series about SDSU RB Pierre Strong Jr.

Navy vs Memphis prediction, odds, line, and how to watch the Week 7 game