Here at Draft Countdown, we are film watchers that break down what we see and how that would translate to the NFL. But, with new areas of analytics emerging focusing on college statistics and draft capital, it is worth checking in and seeing how the players in the 2022 class match-up with historic draft capital.

The charts and information below comes from good friend @aNellytics who is the analytics wing of the Devy Marketplace podcast I do with Kane Fossell. Nelly has a background in statistical analysis and has put a lot of work into looking historically at college football and how it lines up to players today. Feel free to join the Devy Marketplace patreon and/or follow Nelly on twitter to get all his info!

Utilizing data from @CFB_Data and @nfl_data_py, Nelly developed a “Heat Map” of Power 5 QBs being drafted in the 1st round. This combines two statistics:

This stands for rushing Market Share. Simply put, it is the percentage of rushing yards the player holds compared to the rest of his team. So, if the QB rushes for 10 yards and the entire team has a total of 100 yards rushing, he would have a 10% rushMS.

This is an adjusted yards per attempt passing that takes into account touchdowns and interceptions along with passing yards and attempts. The formula is the following:

These have been isolated as the best predictors of draft capital with the fewest outliers. The formulas will continue to be honed in to be more accurate as time goes on as well.

Let’s start with the Power-5 Conference. The percentages below indicate what % of QBs who hit these thresholds were drafts in Round 1. Here is a heat map focusing on first round draft capital since 2006 (last 15 years) for QBs using the two statistics above:

With this being a Heat Map, the “bucket” the player falls into doesn’t matter as much as the trend toward draft capital. A few of our players this year fall into a rarer 17% bucket, but the statistics trend upwards to high round draft capital.

Looking at the current crop of 2022 eligible Power 5 QBs and their aY/A and rushMS this season (through Week 10) makes for intriguing results. Let’s dive in:

This has been Corral’s best season in both marks, and puts him in a solid spot on the Heat Map for 1st round draft capital. Though his bucket is 17%, his increased rushMS trends above the 33% mark and is even inching toward the 80% mark with better rushMS. Corral is locked into the Top 100.

Howell has had a strange season filled with the most running he has ever done, by a longshot. His passing numbers are also muted a bit this season, but if we take his aY/A last year (the highest mark of his career at 11.12,) it puts him in the 80% bucket for Round 1 draft capital. Take Howell’s experience and now rushing ability, and he is a near lock for the first round of the NFL Draft.

Pickett has had the best numbers of his career in both numbers and is in the 33% bucket for Round 1 draft capital. As the Pickett hype gets going, he has enough athletic ability to be a consideration that high and seems to be locked into the Top 100.

Hartman is a 4 year Sophomore, so there is a chance he declared. He has been a dual threat all season and his numbers put him in the 33% bucket for Round 1 draft capital. The numbers indicate that perhaps he is being slept on and could hit Top 100 draft capital if he declares.

Hooker has had a very successful season for Tennessee and hasn’t been on the draft radar much, but perhaps he should. He is in the same situation as Corral in the 17%, bucket but trending above the 33% mark for worse rushMS and toward the 80% mark for better rushMS.

Hooker isn’t likely to be a Top 100 pick, but his stats do tell a story that the draft community hasn’t latched onto yet, and he should be considered a 3rd day pick with upside.

For the rest of the non-P5 FBS, here is what the heat map looks like for Round 1.

Willis’ bucket doesn’t look great at 0%, but it places him above the 8% due to his increased passing ability. Being a superb athlete on a non-P5 team puts Willis in rare air and is why he is likely to go very high in the NFL Draft.

Adding in Ridder’s best rushMS of his career at 27.70%, he becomes an intriguing prospect. He hits the highest area of what for the map and is a good bet for solid draft capital. The 1st round may be more within reach than us draftniks realize, and Day 2 seems like a good lock.

McCall breaks the system with his high aY/A as a non-Power 5 QB. Though he has now gone down with injury, his statistics are off the charts in terms of passing efficiency. Though many do not view McCall as a high end prospect, the analytics show a near lock for the Top 100 and potentially a first round talent.

Even as a P5 player, only 4% trending the wrong way. Since 2006, there hasn’t been a non-P5 FBS QB drafted in the first round with negative rushMS. The only Day 2 picks were massive busts in John Beck (2007) and Jimmy Clausen (2010). Even including Power 5 QBs, the only first round QBs drafted since 2006 with negative rushMS were Jared Goff and Brandon Weeden (not exactly shining examples of great NFL QB play). Even the Day 2 players are a bunch of names that never became consistent NFL starters: Christian Hackenberg, Chad Henne, Mike Glennon, Ryan Mallett, Nick Foles, Sean Mannion, and Cody Kessler.

Ultimately, Carson Strong isn’t a good NFL Draft prospect despite some of the physical tools of his arm, and the analytics back up that side of the fight about Strong as a prospect

Here is a table from Nelly showing the players above along with some NFL historical counterparts who succeeded and flopped in the NFL at QB: 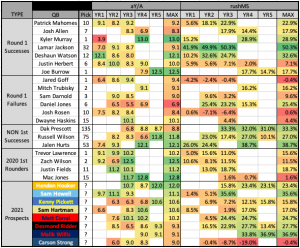 Ultimately, a combination of film study and analytic profiles can be used to try and decipher how NFL teams will value these prospects and where they will be drafted. As the analytics process continues to be refined (and these QBs finish their season) I will revisit as the season goes on and see if it can help in predicting how NFL teams will view these QBs, especially those that use analytics heavily.

All the legwork for this article was done by @aNellytics!  Give him a follow on twitter and feel free to subscribe here to see more of his analytics work.

All the Questions Plaguing the NFL This Season

Christian Watson: The Next Cooper Kupp