It was a chilly fall day on October 12th in 2019 when I settled down to take in my usual Saturday glut of college football games. Included was an average Texas A&M Aggies team taking on Top Ten Alabama at home in a game I was prepared to take plenty of notes about. But, it wasn’t future 3rd round QB Kellen Mond or top RB Isaiah Spiller who impressed me for the Aggies, it was true freshman TE Jalen Wydermyer.

In the 3rd quarter, Wydermyer hit a clean seam route off the snap and caught a TD. Impressive, but the Bama defense seemed to miss the assignment. Then, in the fourth quarter, Wydermyer leapt in the end zone for a catch over future NFL Safety Xavier McKinney. Add in a good game of blocking and a few other key routes and catches, Wydermyer looked like a stud. When an 18-year old pops against one of the best defenses in the nation, I hold it in high regard for the future and just knew Wydermyer was a future NFL star.

Cracks in the Pavement

Unfortunately, I was wrong. Each year, Wydermyer improved his numbers, but the consistency of his play went down. As a sophomore, there were plays being taken off, but that is nothing new when scouting prospects. Then, as a junior, Wydermyer looked more sluggish and though he still stepped up in that Alabama game, there were some major rough stretches.

Writing it off as injuries at the QB position and a weaker roster, Wydermeyer still flashed explosiveness, speed and great hands. Plus, this TE class wasn’t great anyway I held firm on him as my TE1 and hoped for the best.

Wydermyer did no testing at the Combine. It was a small red flag, but plenty of players weren’t testing. With a Pro Day on March 22nd, all eyes were on Wydermyer. It was a disaster.

First and foremost, he ran a reported 5.02 40 time which is bottom 15% of TEs. At 6’4 and 255 pounds, that is extremely slow with many OT and DL outperforming Wydermyer. Even worse was Wydermyer’s 25.5” Vertical which is in the bottom 5% of TEs ever.

In terms of draftability, no one has run that slow with that poor of a Vertical at TE and been drafted higher than the 6th round. Add in a poor 9’01” Broad Jump and Wydermyer’s RAS is absolutely awful. 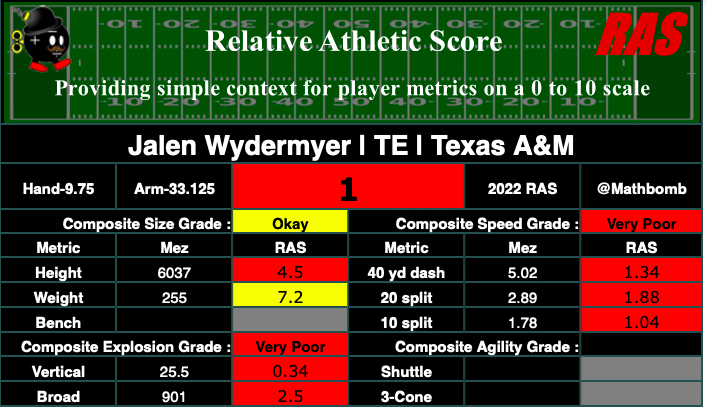 Who is the real Wydermyer?

There was some major cognitive dissonance with these numbers and my Wydermyer film grade. Even when he dipped in effectiveness, I never saw THAT lack of athleticism. So, what is real?

There are reports that another major concern with Wydermyer is some immaturity and effort concerns that plagued his time in college. If true, it could explain the poor workouts despite being more athletic than that. Part of these tests are how good the players is at doing and practicing the test. If Wydermyer didn’t work hard to get good numbers, he would do poorly with bad technique at each.

But, we have no idea if that is true and it is all speculation. Ultimately, these are the numbers. If Wydermyer is this bad of an athlete, he won’t be the star I once saw. Instead, he will be a practice squad player at best and fall into obscurity.

Maybe it is blind optimism, but I still have a little bit of hope. Hope that the 18-year old I saw back in 2019 will re-emerge somehow and be the unicorn of TE athleticism. As an NFL Draft film guy for 18 years, that day against Alabama won’t leave me and just maybe he can show that again in the pros.

Stock Up, Stock Down & Names To Watch: Week 3