I have three loves in my life: football, musical theater, and classic video games. Since the world is not ready for me to compare NFL Draft prospects to Broadway musicals, classic video games seem like the best path. My first console ever was a Nintendo Entertainment System (NES) where I trained up at 3 years old to beat my older brothers at 10 and 13 in classic videogame combat. We had some of the great classics like Mega Man 2 as well as some duds like American Gladiators and Bill & Ted’s Excellent Adventure.

It seems apropos to look at the QBs of the 2022 NFL Draft in the lens of classic NES games. Some have flash but no substance while others were fun grinds that are remembered fondly. Let’s get into it:

Contra blew my young mind as a kid. It was full of color, flash, and such a cool story. Blowing up aliens with easy controls, it can be a contender for one of the best NES games ever. Everything is going great until you get hit and immediately die. Then again. Then again. And the Game Over hits.

Willis feels similar. You watch the rushing, big arm, all of the flash is there. He can rifle the ball downfield on an exceptional pass and then run for huge yardage. Right when you are ready to crown him as a top tier QB draft prospect, he throws an awful pass. Then an interception. Then takes a bad sack. Just like that, you question everything you know.

But, Contra had a big secret that blew the video game world open wide. The Konami Code. We all know it by heart: Up, Up, Down, Down, Left, Right, Left, Right, B, A, Start. Instantly, you get 3 extra lives and the difficult game of Contra gets easier and infinitely more fun.

Can a team draft Willis and unlock the Konami Code inside? If his fundamentals, footwork, and ball placement are cleaned up, the potential is off the charts. Willis could be a Kyler Murray esque weapon who takes the league by storm. Otherwise, those 3 lives may get run out quickly and Willis isn’t able to even finish Stage 1

Many probably have never heard of StarTropics because it came out so late in the NES life. Heck, it was released mere weeks after the Super Nintendo launched. Just imagine Legend of Zelda, but with a Yoyo. The atmosphere is fun, the story is pretty cool, and there are enough action and puzzles to keep it from getting stale. It’s one of those games that checks all the boxes and is fun enough, but ultimately you’d rather just play a better game in Zelda.

Pickett was also a late bloomer taking until Year 5 to have a breakout. Is that a red flag? He’s a fun player though from the fake slide to making sharp passes with gloves on, he looks the part. When you go down the list of what an NFL QB should be, Pickett checks all of the boxes (except maybe hand size) and is good enough. But, we all just wish he was better to feel better about him being a true franchise QB.

Ninja Gaiden blew my mind as a kid. Fast paced action with this small and wiry ninja who was bouncing from wall to wall. It takes some getting used to, but once you have the flow down the action is packed. And the cinematic sequences, oh man. This kickstarted a trend that is still around in video games. All the basics look great for Ninja Gaiden, but then things get hard. I mean REALLY hard. And when it gets tough, you get broken easily. Getting knocked backwards when getting hit is killer and can get you killed quickly. There seem to be impossible sections that can’t be overcome. I love it, but it makes me pull my hair out.

Corral has those high end qualities you want in a QB, and when he is on, it is super fun to watch. He is small and thin, but he is athletic, can run, and has a pretty deep ball. When the game is going well, Corral lights it up and you see why many have him as a high end QB. And that release. His lightning quick release is top tier NFL quality. But, when you look at the tougher games, things get broken easily. Corral has been dinged up with injuries multiple times. Bad decision making creeps in when he trying to mount comebacks. The hallmarks of greatness are there, but watching Corral can make you want to pull your hair out.

The Castlevania series is an absolute classic and the first game on the NES set the tone. The creepy atmosphere sets the tone and starts off with a bang. Rich engrossing detail that makes you feel like you are right there fighting classic monsters is perfection. Between the whip and various weapons, to eating meat from the walls, Castlevania set the tone for a banger of a series. The start of the game makes it seem perfect, but obviously there are a few flaws. Movement is slow, but a lot of the game is predicated on precise movement and jumping. With the amount of enemies and tough bosses, it often isn’t pretty getting through the game but you can brute force your way through at times and just make it to the end. Overall, I’m a fan of the original, though many prefer the more flashy and polished Castlevanias that came much later.

Freshman year Sam Howell was just like Castlevania setting an elite tone right off the bat. He seemed to have it all. Solid arm, good first year production, and he elevated a dying program in North Carolina. Everyone was buying in to him being the next great QB prospect. Year 2 still seemed cool with a bevy of future NFL weapons in Javonte Williams, Michael Carter, Dyami Brown and others filling out the roster, but flaws started to show themselves. Then, this past year, Howell brute forced his way trying to carry North Carolina on his back. It wasn’t always pretty, but he was rushing a ton and showed toughness. I’m a fan for sure, but there isn’t much flash and polish here, so people seem to have soured on Howell a bit waiting for the next big thing.

Would it surprise you to know that Golf is the 10th best selling NES game of all-time? Above Metroid, Mega Man, Punch-Out, and more is good old Golf. An unexpected success story, Golf is right up there with some of the best NES games of all-time in terms of sales. The gameplay? Well, Golf is…fine. It is fun for a bit, but ultimately it’s just Golf. It will never be anyone’s favorite game and has a ceiling of how much fun it will be, but it’s good for a little while. That’s Golf.

Ridder and the Cincinnati Bearcats accomplished more in these past two seasons than anyone expected. Going 22-2, making the College Football Playoff, and even beating a top Notre Dame team this past season is a big accomplishment. But, Desmond Ridder as an NFL Draft prospect is just…fine. He can run a bit, and his arm is okay. The accuracy is all over the place, though he seems to take to coaching well enough. He’s fine. He’ll be a fine NFL QB, never great and never horrendous. What is that worth? Not much in today’s NFL. That’s Desmond Ridder.

Ah, the classic Super Mario Bros. This was childhood right here. The go right, jump on Goombas, get mushrooms and make it to the flagpole. It set the tone for decades of video game platformers and helped bring the world out of the Video Game Crash of ‘83. Popping on Super Mario Bros. today is pure nostalgia taking me back to a much simpler time. But, after playing a few of the early levels, it gives a bit boring, repetitive or downright difficult. I pretty much want to turn off the NES and put in Super Mario Bros. 3 or upgrade to the SNES classic Super Mario World. Sure, my Dad would still love Super Mario Bros, but my nephew sure won’t. Watching a SMB speedrun actually is enough for me. I’m fine leaving this game in the past and moving forward to our new generation of platformers. Super Mario Odyssey here I come.

Watching Carson Strong brings me back to the early ‘90s of football. The pocket statue standing there slinging it with a big arm. You didn’t need any mobility at QB back then and could still play on an injured knee. Classics like Steve Bono come to mind and that wave of nostalgia just hits. Looking at Strong from an early ‘90s lens, he is perfect. But, I yearn for something more now. Give me the Lamar Jackson, Patrick Mahomes, heck Jalen Hurts of the world. But Strong, I don’t think he holds up in the modern NFL.

One of my favorite NES games of all-time, Mike Tyson’s Punch-Out is such a good underdog story. Little Mac going against these big, stereotype brutes to make it up the letter and challenge the real life heavyweight champ in Mike Tyson. Little Mac shouldn’t be there, and this game is so much better than it ever deserved to be. With tight controls and so many different strategies (and fun innovative fights) this kept me coming back again and again. But, no matter how good I was at the game, was I ever going to beat Mike Tyson? No, never did, and I never will.

Bailey Zappe is the underdog story. A transfer up from Houston Baptist to Western Kentucky, he went up against some big time teams this year in Michigan State, Indiana, and UTSA. He did well and those and for the rest of the season. So well that he broke the single season passing yardage and TD records in FBS. Crazy for a guy with a weaker arm and no previous FBS experience. It’s a great story and he should be drafted late, but can Zappe really overcome the mammoth of NFL defenses and become a good starting NFL QB? No, unfortunately, that answer is no.

Kaleb Eleby – A Boy And His Blob

If you’ve never played A Boy And His Blob, you are missing out. It is weird, but a real sleeper of a game that is a fun combination of puzzle, platforming, and some action. You hear the title and see the artwork and feel like it is some terrible NES schlock, but underneath it is a hidden gem. Feeding a blob jellybeans to make it turn into different helpful things? Count me in! Sure, it won’t be on the list of Top Ten NES games anytime soon, but there is some creative juice there. So, it is worth a shot.

Eleby is the definite sleeper of the QB group. Turn on the film and he has a solid arm to make some good catchable passes while keeping his eyes downfield. Sure, Skyy Moore bails Eleby out at times, but there are some pretty darn good highlights in there. He certainly isn’t a top QB in this class, but worth a late round flier pick?  Count me in. 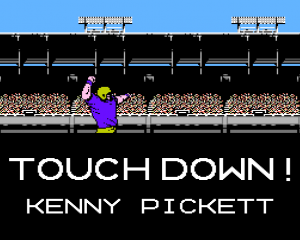 Get more NFL Draft and video game takes from Shane on Twitter @ShanePHallam. Tweet at him if you want his Top 100 NES Games of all-time list.