I know what you’ll say, that’s a bold proclamation about a transfer to Western Michigan from Boston College. And another with one season of solid production. Really from the outside, it seems like they brought Galloway over to fill a similar role in this offense to what Skyy Moore served in 2021. But both players could become the next Moore in 2022. 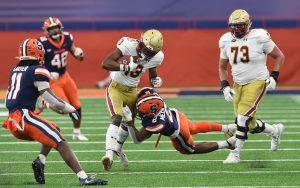 THE QUESTION ABOUT THE WESTERN MICHIGAN RECEIVERS

The reason I pose this question is that Western Michigan is quietly becoming an under-the-radar wide receiver-u of sorts. Skyy Moore, Dwayne Eskridge, and Corey Davis have all been drafted players in the last few years from the Broncos. Looking at the current wideouts on this team, either Galloway or Crooms has the makings of another day 2 potential draftees in the 2023 draft class.

The Broncos starting wideouts will have 2 transfers in Galloway and AJ Abbott and returning junior Corey Crooms. Galloway and Crooms are similar in stature. And if you told me in one year Crooms was on a similar trajectory as Moore, I wouldn’t be all that surprised.

Of the two, Crooms at least has some solid production, 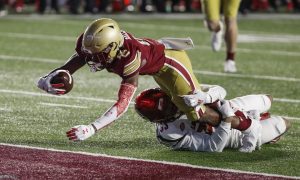 coming in the form of 44 receptions for 768 yards and 6 touchdowns in 2021. Galloway, on the other hand, has produced 18 catches, for 215 yards and 2 touchdowns over his time with Boston College.

The 2022 season will bring change, former starter Kaleb Eleby is now fighting for a spot in Seattle and Western Michigan looks to have a new starter this year (potentially being Jack Salopek), and Crooms is the only returning playmaker with any level of college production, factor in a new offensive coordinator in Jeff Thorne, this Western team could look significantly different this fall.

What we know from the previous seasons under head coach Tim Lester is that this team is not afraid to pass the ball. If you look at 2021, they aired it out 368 times. Though with over 500 rushing attempts, we know they will try to set up the pass by pounding it down the opponent’s throat first! With a bevy of 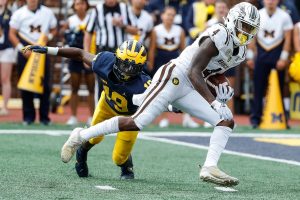 new starters, this team will most definitely lean heavily on the run as the season gets underway.

If Jack Salopek takes the starting role this season, he and Crooms at least have been on the team together enough to have some familiarity with each other. Will that lead to an early rapport? Maybe. Does Galloway have the talent to take the role vacated when Moore left for the NFL? Also maybe.

When you look at a breakdown of how the Bronco’s targets are spread around, typically their top option gets peppered with targets. See Skyy Moore’s 2021 production of 95 receptions. Jaylen Hall came in second with only 46 receptions. Followed by Corey Crooms and his 44 receptions. That’s a significant drop-off from option one to the rest of the receivers. After the top 3 options, it’s a wasteland of opportunities. There just aren’t enough passes to go around. Their top running back Sean Tyler came in fourth on the team with 14 receptions, so not much to see here. So heading into week one, the projected starting three receivers should be Crooms, Galloway, and Abbott. History shows that if those three are the starters, they should get a fair amount of targets. In turn, I’d recommend you keep an eye on them to see how this intriguing situation plays out!

The only caveat to all of this is how quickly the new starters pick up the playbook, if you recall Eleby didn’t “break out” until last season, so there is potential for this team to lean on the rushing attack, and limit how many passes whoever is under center has this upcoming season, so buckle up it could be a wild ride!

Thanks for stopping by! Feel free to keep this conversation going with me on the Draft Countdown Discord or over on Twitter, be sure to check out our mock drafts and all other great content here on DraftCountdown.com!

Bankroll Management Strategies that Pros Use in College Football

Greatest NFL Players of All Time