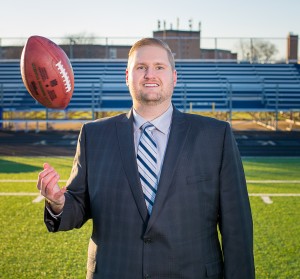 Scott Wright is a native of Minnesota and graduate of St. Cloud State University where he double-majored in Mass Communications and Communication Studies.

Hi!  I’m Scott Wright and I love the NFL Draft.  I have often been told that my passion is clearly evident when I speak about the draft and I consider that to be a great compliment.

I am extremely proud of what I’ve been able to achieve as an independent NFL Draft analyst over the course of almost two decades.  Throughout the years this site has come to be respected as one of the most accurate in the industry.

Not only do I consistently finish near the top of the standings in the trusted, invitation-only Mock Draft and Top 100 contests run by “The Huddle Report” but I’ve actually won both.

I am also a member of The Football Writers Association of America (F.W.A.A.) and have been fortunate enough to cultivate relationships with colleagues and sources from every aspect of the football world.

I started what would ultimately become DraftCountdown.com as a hobby in high school in 1997.  I never could’ve imagined it would become one of the most popular websites of its kind or that it would lead to me appearing on television, radio and in print all across the country.

I was even in the Madden NFL video game, which is easily the most impressive accomplishment in the eyes of my friends.

Being able to make a living watching, writing and talking about football has been nothing short of a dream come true.  For that I sincerely thank the millions of draftniks who have visited and made it possible.