This Big Ten match-up was the premiere one on Thursday night to showcase 2022 NFL Draft talent. Minnesota hit the Buckeyes in the mouth, forcing a rough start from young QB CJ Stroud, but Ohio State ultimately came through to win. Both teams have numerous draftable prospects to dissect. 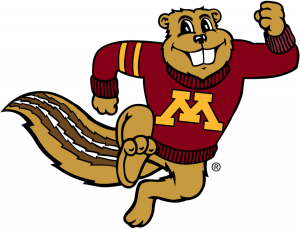 Mohamed Ibrahim was an absolute monster in this game. 30 carries for 163 yards and two touchdowns for him as he was torching the Buckeyes. He isn’t a long speed RB as evidenced when he got run down on a potential long TD run, but he has most of the other traits needed. Excellent vision and high-end cutting ability created a problem for the Buckeye defense, which would leave open those cut-back lanes that Ibrahim would always find. Add in a good burst off the line, and he is a Zack Moss type of runner who can churn yards and rarely goes down on first contact. He looked like he was on his way to being a Top 100 pick with another huge, productive season.

Unfortunately, disaster struck with a significant injury occurring in the second half for Ibrahim. Though the injury results aren’t in at the time of publishing this, it didn’t look good. An Achilles injury could likely mean the end of his shot at the NFL and potentially the end of his football career.

Standing at 6’8 380 pounds, Faalele was tough to miss at RT in this game. He showed that rare blend of size and movement ability with a good pop off the snap and pretty light foot movement for a player of his size. He paved the way for a few Ibrahim big runs and will be forcing his way up my rankings.

Schmitz may not be a known name, but he commanded the offensive line and made blocking calls to lead to an excellent performance. He was pushing around Ohio State DT Antwuan Jackson consistently throughout the game with a good leg churn when run blocking. There were times where he would get knocked off balance a bit, especially in pass protection, but he has some NFL potential for sure.

It wasn’t the best game for the Clemson transfer, who Paris Johnson Jr.manhandled throughout the game. He didn’t get much of a pass rush, and his best plays were when moving horizontally to fill gaps in the run game. Playing in a new defense may take some time, but this wasn’t a great start.

Mafe is an athletic pass rusher who was pretty silent most of the game going against Petit-Frere. He pressured CJ Stroud early but couldn’t get much traction for most of the game. The athleticism is apparent, but he seemed to lack the pass rush repertoire to problem solve when not getting past the edge. He is likely draftable as a developmental prospect.

Olsen played LG in the game and was the main pulling guard to lead block. His aggression was solid, and he worked well with the rest of the offensive line. Olson did have a bad penalty after a play with unnecessary roughness, but overall a good game. He may not have the highest ceiling or athletic ability, but Olson showcased NFL potential in this game.

He played RG in this game, Andries showcased his versatility, and he had a solid game. He often got a good push in the run game and seemed best when run blocking with a drive. His upper body strength was impressive, moving bigger defensive linemen out of their gap and providing big holes for the run game. His play made me think Guard may be his best position, and despite him not being super athletic, he is a draftable prospect.

Morgan is a natural leader and well-liked by his team, but he is not an NFL QB. He made a few critical throws were made, but his weak-armed zip and inconsistency just won’t fly at the next level. Perhaps we see Morgan as a coach one day in the NFL, but not a QB.

Nubin played closer to the line of scrimmage and seemed to be reading the run more than the pass for most of the game. With good tackle technique, he closed with solid speed and showcased some special teams potential.

CAB was injured and did not play in the game.

Olave could have had solid draft capital had he declared last season, and the leading WR for the Buckeyes last year performed again. Multiple times in the game, he found a soft hole in the Gophers defense for huge touchdown receptions where his smooth movement skills got him open in space and allowed him to be dangerous after the catch. Though he isn’t quite the size you’d want or as fast as you’d want, the short area ability and knowledge of the game go a long way. Olave looks the part of a Top 50 NFL Draft pick and will settle in there.

Wilson was the favorite target of shaky first-year QB CJ Stroud with five catches, 80 yards, and a touchdown. His athleticism was on display, and with it, the potential to be a first-round pick in 2022. The highlight was a one-on-one out of the slot where the corner had no chance to cover his movement and separation ability. A tough diving catch early that he missed would have also been a highlight. If Wilson keeps up this level of play, the top 50 is a definite possibility in the 2022 Draft.

This was a big first game for Harrison, whose key play was a strip of Minnesota QB Tanner Morgan, resulting in a scoop and score by Haskell Garrett. Harrison showcased his power in the pass rush category throughout the game with excellent bend and movement while fighting off blockers. He also had a huge stop in the short-yardage run game, often setting the edge decently. His motor ran a bit hot and cold at times, but the potential is there for Harrison to develop into a top edge in this class.

Ruckert was used mainly as a blocker and showed NFL potential, sealing a block for a big Miyan Williams rushing TD. His one reception was a smooth catch from Stroud without losing speed, doing some damage after the catch. The potential to be a top TE is there, but the team’s many options may not showcase him.

Garrett’s scoop and score was a highlight which is an example of his solid and intelligent play. Not the best mover, he still was reasonably disciplined in his gap assignments and forced the Minnesota running game to move away from him. With the average athletic ability, Garrett likely falls into the late Day 2 category at best right now.

Vincent made some great penetrating pass rushes and plays against the run, but other times would get pushed off the ball creating big holes for Mohamed Ibrahim to run through. The explosiveness and lower body drive are apparent, some good traits to have, but he doesn’t follow it up with good stack and shed technique to close gaps. He is a guy to watch and see if he improves, but maybe more on the later round end.

Smith has a quiet game, but it was solid overall. He had a few pressures of Tanner Morgan early, leading to bad passes, and his tackling technique also saved some additional yardage in the run game. With long arms and good burst, Smith could be a later-round pick with pass-rushing upside.

Mitchell seemed to be around the ball often and was the best LB in the game instinctually.  An early hit on Tanner Morgan almost led to an ejection when he lowered his head, but past that was good sideline to sideline ability and reading and reacting. Shedding blocks wasn’t ideal, but Mitchell has athleticism and instincts. A name to watch this draft season.

Gant had a pretty poor game and was a big reason the second level of the Buckeyes defense got torched. He was in the wrong position a few times early, not securing a tackle on Mohamed Ibrahim. A late roughing the passer penalty on a big interception nearly turned the game for the Golden Gophers as well. A rough outing, he will have to have a  bounce-back soon.

Petit-Frere played LT and was the Buckeyes’ best pass protector in the game. He held his own against the Minnesota defensive line with smooth movement and good punching ability. Most of the day, he was matched up with the athletic Boye Mafe, and Petit-Frere won that battle. It is worth watching him against other competition to see if he can compete with the top OTs of this class.

To put the best offensive line on the field, Munford is starting at LG this season. On one hand, he was a critical run-blocking cog for some tough yardage while being athletic enough to pull and create good zone lanes. On the other hand, a move to OG may limit Munford’s potential draft capital and where he could stand for the draft. Ultimately, his versatility will be on display this season.

Teague was the #2 RB in the game behind Miyan Williams, though hot freshman TreVeyon Henderson is on his heels. Teague is rugged and productive but doesn’t flash that burst and athletic ability on the field that he indeed possesses. Despite his measurables being very good, Teague just doesn’t do anything special and certainly was not better than Williams or Henderson today. Maybe a late-round upside swing at best.

Proctor was one of the pleasant surprises of the game for the Buckeyes. He played downhill against the run and was disciplined in playing run lanes. Proctor had some issues with technique and finishing tackles; it was a solid day. He forced a bad pass by Morgan by manipulating the QB into throwing scared and had an interception with a significant return called back. A player to watch in the future.

Hooker was suspended and did not play in the game after an OVI.

Banks did not play in the game due to injury.

Cage was unavailable in the game, with no explanation given.

Miller did not play in this game due to COVID.

A transfer to Ohio State, Gaoteote was not ruled eligible by the NCAA yet to play for the Buckeyes, so he did not travel to Minnesota.

2022 NFL Draft Wrap Up: UCF Charges Back on Boise State