There wasn’t anything pretty about this game unless you love defense. Georgia beat Clemson 10-3.

Let’s look at the 45 different 2022 NFL Draft prospects from this game.

Daniels dinked and dunked all night. He was 22-30 for only 135 yards. He got fooled by the linebacker on his one interception. There was nothing he did in this game to make me think he can be a high first round selection.

The younger brother of Dalvin is usually more productive than he was here. Cook never got anything going at all. He had nine offensive touches for a paltry 26 yards.

McIntosh has a nice burst in open space. He also showed some versatility in the passing game. McIntosh’s one catch came from the slot. He was very productive, however. The native of Fort Lauderdale had four touches for 17 yards.

White was easily the most prolific of the Georgia triumvirate of tailbacks. He has good vision, decent burst, and is a patient runner. White bowled over a defender to ice the game in the fourth quarter. He finished the contest with 14 touches for 87 yards.

Jackson got the start but saw zero targets.

McClendon got the start at right tackle. The redshirt sophomore handled himself well for the most part.

Ericson did not start but came into the game at right guard early after an injury to Tate Ratledge.

Salyer got the start at left tackle and played pretty clean. Salyer’s length will probably move him inside in the NFL.

Shaffer got the start at left guard and had a couple of rough plays. On the second play from scrimmage, Shaffer had a false start. He then later got called for holding that negated defensive pass interference in the endzone.

Wyatt had a good game with a couple of deflected passes at the line and two TFLs. Wyatt played a lot of three-technique in this game.

Davis is much more athletic than his 330-pound frame would indicate. He is more than a block eating nose tackle. Davis has quick hands that he sheds blockers with. Then he has the power to run right through them. Davis recorded three tackles, two TFLs, and one sack against Clemson.

Walker played more on the edge than he did the interior. He wasn’t as “loud” as the other defenders but he still finished with two solo tackles and a sack.

Anderson is going to rise up my board this week along with a couple of other Georgia defenders. He beat the Clemson right tackle with a straight arm and then shed him quickly for a sack. Anderson had four other tackles in the game as well.

Smith will be another riser on my board after this week. He powered the Clemson left tackle (McFadden) with his hands and forklifted him back into the QB. Smith finished with three total tackles.

Tindall has amazing closing speed. He also had three tackles and the below solo tackle that drew raves from Senior Bowl executive director Jim Nagy.

How talented is Georgia’s defense? Checkout this clip of Channing Tindall (@Kingschan_). Ridiculous range for 602v and 235v. Not many ‘backers can get from A gap to outside numbers for TFL. Coaches say he’ll be an “absurd” tester at Combine. He only played 11 snaps on Saturday. pic.twitter.com/MtBEVBfLf7

Dean made most of his hay in this one rushing the passer. He notched two sacks, both on delayed blitzes.

Walker only had one tackle in this one during his limited playing time.

The Clemson transfer had a solid game in coverage in his “revenge” game. Kendrick didn’t give up anything downfield. He had three tackles.

Smith will be another riser from this one. He read the QBs eyes beautifully and undercut a route from the WR (Ross) and ran it back for a 74-yard TD.

Brini had a solid game on the backend with four tackles and one PBU.

Cine was very active. He broke up two passes and was in on nine tackles.

Smith did not play.

Camarda punted five times for a 43.4-yard average. He dropped four of his punts inside the twenty. 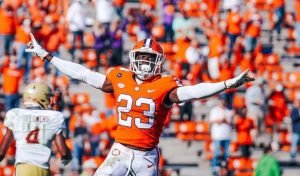 Dixon only had one carry but it was the best one of the night for Clemson. Dixon showed quick acceleration around the right side for ten yards.

Galloway was targeted six times but only caught three passes for 13 yards. He is a nice target and has RAC ability but didn’t get to show it against Georgia.

Ladson was targeted seven times but caught only one pass for four yards.

Ngata had the most productive night of Clemson’s big three receivers. He caught six of his eight targets for 110 yards. He also had a nice 44-yard catch downfield. Ngata is going to be really good once the rest of their offense gets in sync.

It was great seeing Ross on the field again after suffering a scary spinal injury. He was targeted ten times against Georgia. He only caught four passes for 26 yards. One has to believe that anyone who has had a spinal injury would see his draft stock suffer because of it.

Putnam played left guard for Clemson and had a rough go of it. He struggled with all of the twists and stunts that Georgia ran.

McFadden got bullied by Nolan Smith on his sack. The Clemson left tackle was mostly up and down the rest of the night.

Booth had a good night in coverage and had a great open field tackle of James Cook on a swing pass. He finished with four tackles and a PBU.

Goodrich had a great night in run defense notching twelve tackles. He had a defensive pass interference penalty that was offset by a holding call.

Jones didn’t play much but he managed to get a DPI called against him while he was out there.

Davis missed the game while in COVID protocol.

Henry and Upshaw were both listed on the participation report but registered zero stats.

Thomas missed all of last year with complications of COVID and other ailments. The former five-star recruit didn’t have a huge impact in this game but he did manage one QB hurry.

Spector managed to fool J.T. Daniels on his interception. Spector was sideline-to-sideline for Clemson with eight tackles (two solos).

Skalski for some reason constantly likes to make tackles with his head down. It’s like he wants to end up paralyzed. Clemson schemes their defense to allow Skalski to flow all over the field. He finished with 14 tackles (8 solos).

Both Clemson safeties were kind of afterthoughts. They finished with two tackles each.

**Update** Zanders suffered a shoulder injury in the first quarter and will now miss the remainder of the season.

Potter made his only kick of the night. A 22-yard field goal.

2022 Prospect Recap: Maryland Wins a Fun One over West Virginia