Typically, we have a good sense of who the best NFL teams are by the middle of November.  Though the 2022 season may be one of the wildest to memory, it only makes it more exciting to crack out the game tape and look toward the future. Who’s contending? Who’s pretending? Let’s dive into my top 10 teams as the National Football League rolls into week 11.

The Bucs most recently traveled into Munich and took care of business against a hot Seattle squad. The NFC South is by no means threatening, yet it’s no time for the Bucs to let their guard down in a tight race. Looking ahead, Tampa Bay has a pair of winnable matchups against Cleveland and New Orleans.

I feel like a broken record, but there is something undeniable about a fired-up Tom Brady who is called upon to salvage a season. While most personal gossip could derail an athlete and be a monumental distraction, TB12 uses it as fuel. All memes aside, the 45-year-old Quarterback is 2-0 since finalizing his divorce… 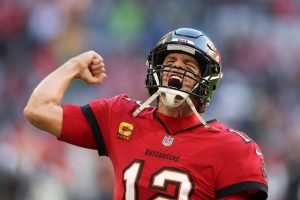 The Niners are one of those teams that seem to hoodwink all of us until Thanksgiving. “Are they or aren’t they legit?” They’ve got us exactly where they want us! Opening the season with sophomore QB Trey Lance as the starter, they would eventually move on to ol’ trusty Jimmy Garropolo when Lance suffered a season-ending injury. Not only does Jimmy have a veteran presence, but he protects the football and executes Shanahan’s proven offense with minimal blunders.

Not so fast, though. DeMeco Ryans’ first-ranked defense in San Fran is the real star for this team. Today, San Francisco would sneak in as the 7th seed in the NFC race.

We have seen my high praise of the resurgent Giants this season so here you go clocking in at number eight! There is a lot of talk about the legitimacy of this 7-2 team. It’s clearly hard to let go of the past when teams like New York have underachieved for many years. Their statement win over the Baltimore Ravens should have quieted doubters, yet here we are.

With all of that being said, I understand the G-men have little room for error as they try to pave their way amidst a surprisingly deep division. If the season ended today, three of the NFC East teams would have a playoff berth (Philadelphia at 1, New York at 5, and Dallas at 6).

Hello, New York! The other team to share the Meadowlands deservedly parks on this top-10 leaderboard as well. This team led by defensive-minded Robert Saleh is really coming to life this year and the offense is not a slouch either. Rookie Breece Hall’s injury was a tremendous blow to this team as the running back was on pace to receive Offensive Rookie of the Year votes.

Despite this challenge, it will be thrilling to watch the revitalized Jets close out the season amongst a division that features Super Bowl favorite Buffalo Bills.

There is something about Lamar Jackson and the Ravens that I just cannot quit. Baltimore has certainly had their share of ups and downs, but something about John Harbaugh’s unit just keeps us believing.  Baltimore has committed to their identity which is to run the ball, let Lamar do his thing in the air or on the ground, and erect a solid Defense. The Roquan Smith acquisition from Chicago will give a nice boost as well.

The Ravens are quietly sneaking through the AFC and will come off of their mid-year bye to face one of the easiest remaining schedules in the NFL. 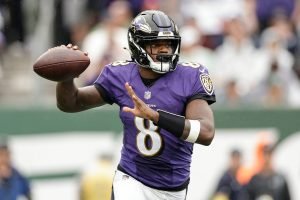 It’s WILD what a few weeks can expose and this is why the NFL is so thrilling.  Despite hanging on by a thread as Super Bowl favorites, we have seen some missteps on Buffalo’s part. Surprisingly, Josh Allen once leading the MVP conversation has now thrown six picks in the last three weeks. Yikes. All of this paired with some key injuries on defense is calming the nerves of opponents who thought they were once indestructible.

Have no doubt, though.  This Buffalo team is still a total force that can make a statement in the playoffs and who may get healthy at the right time. The Bills look to take on the Cleveland Browns in week 11 and are expected to come out swinging.

I remember hearing Tyreek praise Tua Tagovailoa as the most accurate quarterback during training camp and I also remember scoffing. Fast forward to mid-season and, boy, he may be on to something.  The MVP candidate, Tagovailoa, is leading this offense terrifically while averaging 35 points per game.

A terrifying receiving duo lies downfield on the Fins: Jaylen Waddle and Tyreek Hill. This is not their only threat to opponents though as the Miami ground game is coming to life. The Dolphins get a well-deserved bye week where they can pick up where they left off against Houston in Week 12.

New coach, who dis? Kevin O’Connell’s purple and gold are putting the whole NFL on watch. This team has entertained us with the Kirk Cousins chain gang bit for weeks, but they have also entertained us on the field week in and week out. Justin Jefferson is THE guy and one of the toughest receivers to cover in the entire NFL.

Most recently, they had a large matchup against the Buffalo Bills and walked away victorious. A lot of people don’t have faith in Kirk Cousins down the stretch, but the way this team is continuing to play (and win) has to be changing the minds of many. Barring a crazy string of injuries or fluke misfortune, this Vikings team should easily clear the NFC North and have a chance to make a playoff run.

Not only does Quarterback Jalen Hurts deserve a good look at MVP votes, but he remains humble while doing so: ‘I’ve been 8-0 before and lost the National Championship. Just take it day by day.” Philly fanatics are crossing their fingers and toes that they are able to host a couple of games in January should they remain in control of this conference.

It isn’t just the prime-time loss to NFC East foe, Washington, that knocked them out of my top spot. I certainly do not need to see a perfect season, but I need to see how Philly can finish the remaining seven matchups. They are certainly a legitimate contender, but we KNOW the Chiefs can pull through because we have seen it time and time again.

Even a Chiefs team without Tyreek Hill is unimaginably potent. The league continues to marvel over the play of Patrick Mahomes who is trending in the direction of the GOAT conversation. The 2018 NFL MVP and Super Bowl LIV MVP are simply hard to bet against despite the loss to AFC rival, Buffalo in week six.

If you gave me the option to ride with the Chiefs or the Bills in a playoff game, I am taking the Chiefs nine times out of ten. They are proven, so superbly coached, and let’s not forget the newly acquired rookie wideout Kadarius Toney from the Giants. Pair all of this with a very winnable remaining schedule and this playoff contender is going to go deep into the postseason. 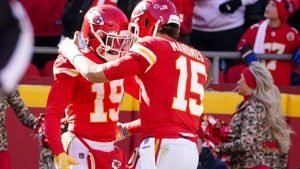 Zany Stats and Highlights After Week 3