After today, we will be at the midseason point of the new NFL season, so I wanted to update my playoff, Super Bowl, and Draft Order predictions. You can find the original pre-season predictions on twitter at #HallamPredictions. The second half of an NFL season doesn’t always follow the first half and new games can get hot, go on streaks, and do well. This was predicted game to game for the rest of the season, so even I was surprised at how some records came out. I tried not to make these super vanilla either, so here we go!

*Shout-out to PlayoffPredictors.com for making this process easy and providing the screenshots! 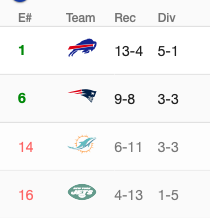 The Bills should continue to roll with a top tier defense and an offense that can throw the football. The Patriots sneak in with a good running game and good coaching. We should see Mac Jones continue to develop and the Patriots pull some upsets in the second half of the season. The Dolphins feel a little low record wise (they should bounce back from a tough first half of the season,) but that defense and Offensive Line is hard to trust. I don’t have much faith in the Jets with Zach Wilson back pulling it together. 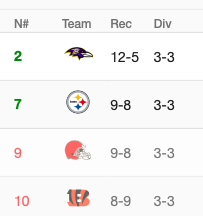 The AFC North is tight. The Ravens are the best team and came out with a better record than I even expected when predicting games. If certain elements get tweaked though, 12 wins is doable. The Steelers/Browns/Bengals were all very tight and I think all end up in the 9-8/8-9 range. The tiebreakers took over here for the Steelers in and the Browns/Bengals out. 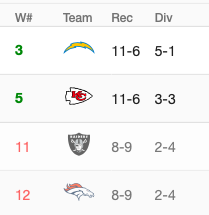 The Chiefs are bound to bounce back and get things into gear at some point, so an 11-6 record feels accurate for them. The Chargers end up winning the division though with a 5-1 divisional record as a team that has the talent to pull it all together and match up with the Chiefs. The Raiders/Broncos aren’t bad, but it was pretty tough to pick them winning games with how their seasons are heading. 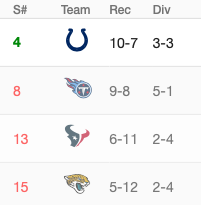 The Colts offense should be able to carry them to some wins and squeak out the division especially with the change to the Titans offense and their defense not matching up. 9-8 feels fair for the Titans, but tiebreakers keep them out of the 7th spot. People may scoff at the Texans/Jaguars winning 6 and 5 games respectively, but I think these teams will get tougher late in the season and be more competitive. 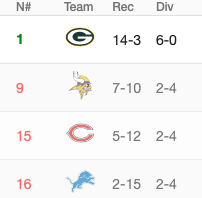 If the Packers get Aaron Rodgers back and everyone is healthy, they will be a force moving forward. The rest of the division is average at best. The Vikings have the talent to win some games, but also drop easy ones. I doubt the Bears and Lions turn it all around anytime soon, though 5 wins feels a bit light for the Bears. 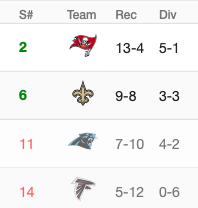 The Buccaneers should continue being a top tier team with that offense and run defense. The Saints without Jameis should still be alright. Their defense is top tier and they have playmakers. 9-8 feels right. The Panthers are average at best, and the Falcons are a bottom tier team that has the offensive firepower to beat other bad teams. 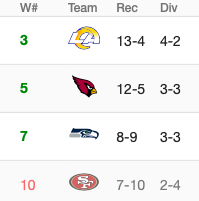 The Rams are putting it together, but I still expect them to drop a surprise game or two. The Cardinals will fall back to earth a bit, but still have a good enough defense to get a solid playoff seed. The Seahawks are an enigma, but with Russell Wilson back soon enough, they could squeak into the playoffs with 8 wins. I’m not sure the 49ers will do enough to put them in contention, but 7 wins seems fair. 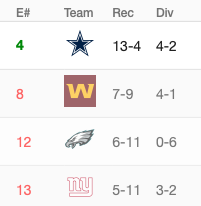 The Cowboys with Dak Prescott should roll, especially as the defense continues to improve. Washington should be better than they have been, but not enough for the playoffs. I struggle to see the Eagles or Giants making a playoff run. 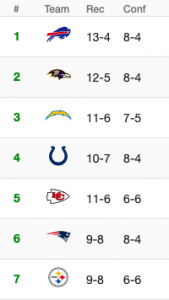 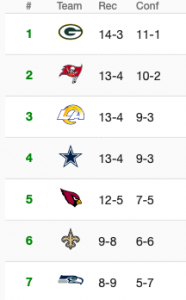 The better offenses win in the AFC. The Colts may match-up well against the Chiefs in a higher scoring affair, but the Chargers and Ravens should have the firepower to beat the stalwarts.

All three home teams get the win here. The Cowboys defense should do just enough to beat the Cardinals while the Rams and Bucs cruise to victories over the Saints and Seahawks.

High scoring games here, but the Bills beating the Chiefs again seems likely (unless the Chiefs REALLY pull it together late in the season). The Ravens/Chargers game is tough, but I’ll take the veteran coach to pull out a victory.

The Rams have been building to compete with the Buccaneers, and I think they can finally do it in the rematch. It would be a fun game (maybe even for the NFC Championship,) but the Rams defense is trending toward being able to contain Tom Brady a little bit. The Cowboys/Packers are another good one, but the Cowboys and Mike McCarthy get the revenge game this time.

The Bills match-up well with the Ravens, and if they can get up early, it could be tough for the Ravens to recover. I think the Rams at home tip them over the Cowboys with the ability to come back when behind.

I’m pivoting to the Rams taking the whole thing! The offense has been rolling, the zone blocking scheme is working, and the defense continues to improve. The Bills can do it (and another Super Bowl loss heartbreak would suck to see,) but I wonder if a team can make them one dimensional that they can be stopped.

Here would be the final draft order (not only the first round, but entire order without trades: 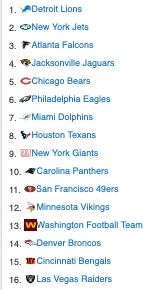 If you want to send me your hate messages and why I’m wrong, tweet at me @ShanePHallam and check out my other work here.

Is Will Anderson A Generational Talent?