Since the year 2000, the NFL MVP has only been awarded to a non-quarterback three times. Clearly, we have a handful playing to win yet again this year. Both Josh Allen (Buffalo) and Patrick Mahomes (Chiefs) are the current front-runners and rightfully so as they sit neck-and-neck on nearly every stat thus far.

The NFL MVP Race Is On

A Look at the Stats

The two quarterbacks have been remarkable in most every way as evidenced by their numbers, but also by the eye test.  When those two guys are on the field, their teams excel.  No Tyreek for Mahomes? No problem. Josh Allen facing a fierce Kansas City playoff rematch in week six? Allen handled business.

Creeping closely behind Allen and Mahomes are a few names: Jalen Hurts, Lamar Jackson, and Joe Burrow.  With a lot of season left to make their cases on the field, we watch to see if any of these men can overtake the hot AFC quarterbacks mentioned above. 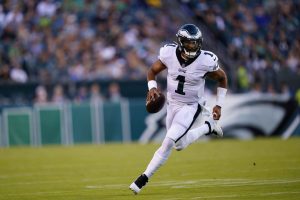 Burrow’s odds have improved slightly in recent weeks while Hurts and Jackson haven’t tipped the scales either way.  The latter quarterbacks mentioned both have incredible abilities with not only their throwing ability, but their elusiveness on foot. It will be interesting to see if either can run away with the MVP.

There are two players who should make a case if they continue to elevate their team’s play through season’s end: Geno Smith and Saquon Barkley.  Geno’s Seattle sweetheart story has been one for the books as he has bounced back from written-off, back-up QB to beating out Drew Lock for the starting job and actually delivering.

While Smith just snuck into the top ten at +4000 odds, Saquon astoundingly remains in the outside 10 looking in.  Perhaps Head Coach Brian Daboll, the current runaway for Coach of the Year, is getting more focus at the moment.

What will ultimately tip the scales? Winning always helps, of course.  Will someone need to perform through adversity? Will injuries play a role?  With the league littered with so much parity, the strength of schedule seems less applicable than in other seasons.  However, let’s take a look in order of toughest to easiest for remaining strength of schedules:

My prediction won’t surprise most as I truly believe this is Josh Allen’s honor to lose.  There seems to be a little bit more swag around the Bills quarterback and maybe that is because he would be a new name on the MVP trophy. Maybe the Bills mafia is catching fire!

It will be an exciting 11 weeks seeing how everything shakes out. We would love to hear your predictions so give me a shout on Twitter and let me know all your predictions!

Why Do the Rams Hate the NFL Draft?